Difference between FLAC and WAV: which is better?

As an audio engineer or music producer, there will always be a debate about which file format is best for your project. In the studio, some people will say that FLAC is the best format to use for all kinds of production work, but other people will disagree with them.

We can’t say which one is better until we look at the specifications and how people use each file format.

As you can see, this is where the debate between WAV and FLAC starts to take place. Here, I’ll go over the specifics of each format and the pros and cons that come with them.

People always think that when they compare two types of files, one of them will win. That’s a shame. There isn’t one here. In the end, it will all depend on what kind of audio file format you want to use.

What is FLAC, then?

People use the term FLAC to refer to a format that doesn’t lose any of the sound. When you compare FLAC to other formats, like mp3, FLAC compresses the audio and still has good sound quality.

When audio is compressed to a certain format, the device that plays it has to play it back again in an uncompressed format.

People who use FLAC to make music and do audio engineering work can be sure it’s a good choice because it can easily be compressed and played back quickly.

It’s hard to send big files over the internet when you work with audio and music.

Makes it easier to do this because FLAC is able to compress audio files into small ones that can be sent through the cloud and other file-sharing tools.

Almost all of the instruments in a song will sound a little different if you start to compress it to mp3. FLAC doesn’t have this.

The only time I think you should use this format is when you send demo files.

What does WAV stand for?

WAV can be used to store Waveform audio files. Uses audio and music production systems use this format because it’s the most uncompressed way to store a sound file. The only problem you’ll have with a WAV file is that it takes up a lot of space.

When you look at an uncompressed file, the file size is bigger than all of the other types of files that you can export from an audio production point of view.

Getting an uncompressed file with no distortions or loss of quality is the big benefit. You can also save a lot of space.

When you look at a WAV file in an audio waveform viewer, you will be able to see the silences as well as the sounds that are being recorded in this file. WAV files become longer and have more data inside of them because of this.

Because WAV files don’t have to be compressed, they sound louder and clearer than other types of files, like MP3. FLAC isn’t the same thing as WAV. You can listen to WAV files on any device, no matter what operating system it’s running on.

Use this file type only when you need to do more complicated audio editing and exporting.

I hope that now you know more about WAV and FLAC files. Now, let’s look at the specific terms we’ll use to compare the two file types.

It has a lot of bits and a low sample rate, so

Converting and working together

Let’s look at this one by one. 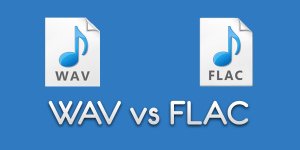 Bit depth and sample rate are two of the most important things you need to know before you start messing around with the quality of your music. You should also know why they are being used in the world of audio.

There are two types of “bit depth.” The first is how many bits an audio file can play back in a second. If the “bit depth” is said to be 16, you will get 16 bits of information from it.

As the bit depth rises, you will get better sound and the size of the file will also grow.

The bit depth is very small, so it’s not very easy to store a lot of information.

Because it can store a lot of information, it has a lot of bit depth.

This is the sample rate.

The sample rate is another term that you will see a lot of people in the music production world use. A word like “bit-depth” isn’t hard to understand.

Sample rate is a simple way to say how quickly the audio file can be read.

The sample rates are lower, so you can’t read faster because you can’t get a faster read time.

Here, you can get as many sample rates as you want.

Audio files that lose quality when they are changed from one file format to another are called “lossy” files. There are a lot of file types that can be lost, like ACC and MP3.

This is one of the reasons that loss files have smaller file sizes and lower quality as well, so this is why. If you use a streaming device, you will find loss file types.

WAV and FLAC files are both lossless file formats that are used for editing and audio production work. The loss files are usually used for streaming. 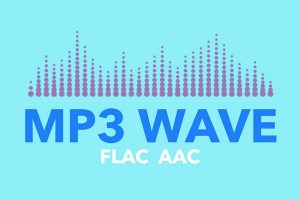 There is a big difference between FLAC and WAV because of the way they compress their files.

The FLAC file is a compressed file that has a lower bit depth and a lower sample rate than other files. Even though you will get better quality with FLAC files, you won’t be able to do as many things with them as you can with WAV files.

Uncompressed: WAV doesn’t have to be compressed. It has more bits and a faster sample rate than MP3. In simple terms, this means that the file format is in its raw form, which means that you can make as many changes to the file as you want while working in a music production software without lowering the quality of the file.

A device will also let you play the file. You will hear all the silences and noises that are in the file.

With a WAV file, the sound is very good.

Compression as a whole just refers to how the files are being stored. As the file size gets bigger, the more information it has. The less data there is in it, the less space it takes up,

This is something you might already know if you’ve sent and received audio files before. Storage is the enemy of audio and music producers.

If you look at how much space a FLAC file takes up, it’s 60% less than what we’d need for a WAV file. If you put a FLAC file instead of a WAV file, you will get almost the same audio quality in all areas, but it will take up more space.

This is also why some of the best streaming services use the file format FLAC. They could use WAV, but because it has a bigger file size, it isn’t being used.

If you care a lot about how much space and how quickly you can read and write to your files, you need to choose between FLAC and WAV.

Changing and working with each other

This is something that most people don’t think about when they talk about audio quality and file types. To understand how FLAC and WAV are different, look at this.

“Can you tell the difference between a WAV file and a FLAC file just by listening to it?”

If you don’t use audio production software to edit these two files, it’s hard to tell the difference between the two.

One more thing you should think about is compatibility, along with how it will work with other things. You should choose WAV instead of FLAC if you want a file format that can be used with everything.

It is true that FLAC files sound better than a lot of other types of files, like MP3s and AACs. Files called FLAC have more quality in terms of bit depth and sample rate so that they work well on all types of entertainment systems.

does converting from FLAC to WAV make the sound worse?

Does WAV have great sound quality, or is it not?

Yes, wav is the best file format out of all of the other formats. In the beginning, it was used to store audio on Windows computers. Now, when people make music, they usually use WAV files.

CD is better than FLAC.

No, CD is not better than FLAC because of how audio files are written on a CD. In the case of a CD, the file formats are usually mp3 and AAC files, which are not as good as FLAC 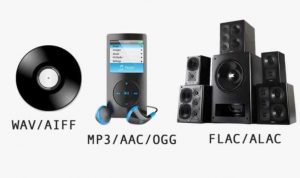 There isn’t a clear winner between FLAC and WAV. Both have a specific use and purpose.

If you want to stream and send files through the cloud, you can use FLAC.

If you want to use an audio production software to edit and work with files, WAV is the way to go.

Difference between computer speaker and a studio monitor