When people think of acoustic guitar, they may conjure up images of personal or stripped-down music. With its own voice, an acoustic guitar can cover a wide range of genres. The sight of frets and strings, albeit simple in design, may be overwhelming to beginners. If you want to learn how to play the acoustic guitar, keep reading!

The acoustic guitar, unlike electric guitars, produces sound solely through the vibrating of strings as they resonate with the instrument’s body. The type of wood used to create the guitar, the strings, and the design of the guitar all play a role in how the guitar sounds, especially with acoustics.

Acoustic guitars are usually divided into two categories. The genre of music you desire to play will determine which of the two is better for you as a beginner.

A steel-string acoustic guitar is an excellent choice for people who desire to play rock, blues, or country tunes on the guitar.

These genre ideas aren’t set in stone, as each acoustic has its own distinct voice in different genres. These recommendations are intended to help you narrow down your options when choosing a guitar. 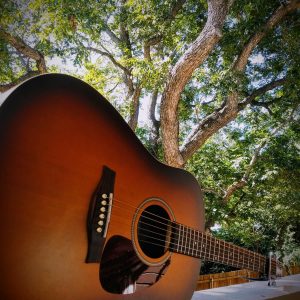 The pieces that make up the guitar are the same whether it’s a classical or steel-string acoustic.

If you take guitar lessons, you’ll want to know the names of the guitar parts because your teacher will most likely refer to them during training. Learning how to play the acoustic guitar requires a thorough understanding of the terminology.

It’s also necessary to know the names of some of the specific parts so that you can communicate or search for that part if you ever need to replace, repair, or improve it.

The body of the guitar is the roundest and largest section of the instrument. The sound of a guitar is affected by its shape. When you first get your guitar, sit down with it and attempt to hold it in your hands as if you were going to play it. Make a mental note of the body shapes or sizes you are most at ease with.

The sound hole is the body’s spherical orifice. It’s where the guitar’s sound waves are released into the air for you to hear. When you first start playing the guitar with your fingers or a guitar pick, you will most likely play above the soundhole.

The bridge is where the strings connect to the body of the instrument. This element is in charge of securing the strings so that they can be tightened and relaxed during tuning.

The neck is the long, slender portion of the guitar that connects the body to the neck. There are thin metal bits on the neck that divide the neck into several sections.

These metal devices are known as frets, and they serve as guides for where to place your fingers when playing certain notes and chords. The fretboard of a guitar is made up of the frets and dots on the neck. 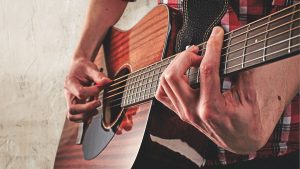 The nut, headstock, machine heads, or tuners can be found as you move down the neck toward the parts on the opposite side of the body.

The headstock is the component of the guitar that extends the farthest from the body. The headstock is where the machine heads attach to the instrument and anchors the strings on their side opposite the bridge.

The machine heads are in charge of tuning the guitar. As you move these parts in different directions, the guitar strings, also known as tuners, will produce higher or lower notes.

The guitar is a multi-purpose instrument that can play both notes and chords. Letter names are used to aid musicians in communicating and identifying what they intend to play. Learning how to play the acoustic guitar requires memorizing these names. 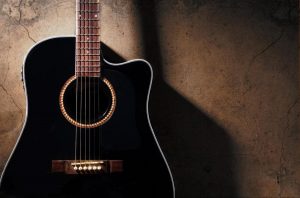 String Names that are open

Sit in a chair with the guitar in your lap and the neck extended to the left. When you glance down at your strings, you’ll notice that they progress from thicker strings towards the top to thinner strings near the bottom.

The guitar’s string names are E B G D A E from bottom to top, or thinnest to thickest.

You can make a note by plucking any of the strings on your guitar by themselves. When you play your high E-string on its own, for example, you get the note E. Notes are individual musical entities that you hear on their own.

A chord is a set of notes played at the same time. You’ve created a chord by playing the E, B, and G strings together. Chords have names, just like notes, so that musicians can communicate and read them.

Guitarists play songs by combining notes and chords. Beginners usually learn basic chords before moving on to notes. After you’ve mastered the fundamentals, you’ll be able to learn and write your own tunes. 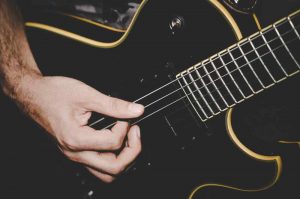 You can start learning how to play the acoustic guitar now that you understand how it works. Because the abilities you’ll need to play the guitar are new and sophisticated, it’ll take some time for your body to adjust. You’ll probably feel weird at first, but remember that practice will help your body become more comfortable.

Posture While most acoustic guitar players sit while playing

if you have a guitar strap attached, you can also play while standing.

If you’re seated, your guitar shouldn’t be tilted away from you so that all six strings are visible when you look down. Hold the instrument near enough to your leg that the bottom edge rests totally on it. Only the Low E-string should be visible when looking down.

Maintain a straight back and relaxed shoulders while sitting or standing. Place your arm around the body of the guitar between the lower edge and right side, allowing your hand to rest on the strings in front of the soundhole.

Your left hand should be anchored behind the neck, with the other four fingers curving around the bottom of the neck to provide access to the fretboard.

How To Be Anxious

The frets on your guitar indicate whether you’re playing higher or lower notes.

You’ll use your left hand’s fingers to hold down a string to a specific fret to play precise notes. To fret a string, hold the note with the tips of your index, ring, middle, or ring finger.

Your guitar teacher or classes will refer to your index finger as your first finger, middle finger as your second digit, and so on until you reach your pinky, which is referred to as your fourth finger.

Different string thicknesses will necessitate different levels of finger pressure. If you exert enough pressure with your left hand while playing a string while holding one of its frets, you will hear a clear pitch ring out.

Apply extra pressure until the note rings clear if you hear a dead note or a buzzing sound. 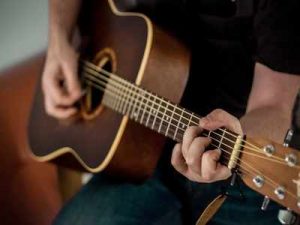 How To Use A Guitar Pick

A guitar pick will be used by the majority of beginners to learn their first chords and songs.

Hold a guitar pick appropriately with your left hand with your thumb and index finger on the upper half of both fingers. Your pick’s pointed end should protrude from the side of your fingers at a 90-degree angle.

To pick the strings, move your wrist up and down while maintaining pressure in both fingers to make the strings ring out.

Holding the guitar pick in your hands and guiding the up and down action with your wrist is a good way to practice holding and utilizing it. Strumming all six of your guitar strings together with the pick is a good exercise. Then practice striking one or two strings at a time with your pick.

Learning to Play Your First Chord

You can start learning your first chord now that you know how to play acoustic guitar. The E minor chord is a good place to start.

To play an E-minor chord, strum all six strings together. You’ll want to learn how to read guitar chord charts properly as soon as you begin learning the instrument.

After that, you’ll be able to start learning more chords and playing your acoustic guitar

Difference between FLAC and WAV: which is better?

What Is The Difference Between Solo Microwave And Convection Microwave